Oor Monsters is an ongoing collaborative project with husband & wife team, Philip Thompson & Gabrielle Reith. Oor Monsters started life as an idea for a print show they had at Aberdeen’s “Beautiful Mountain” cafe in 2010. Gabrielle & Philip each produced a set of A5 2 colour screen prints, Gabi opting for Greek Mythologies / “Classic” monsters & Philip explored “problems as monsters”, where creations such as the “one sided conversation monster” and the “Stain monster” came to life. The show was well attended & garnered very positive reviews from attendees.

Building on the success of “Oor Monsters in the Beautiful Mountain” Gabrielle & Philip submitted work to the wonderful Pictoplasma, who put a call out to illustrators & creatives for ideas on “the missing link” (characters inspired by the Yetti) for their Paris Show at la Gaite-Lyrique. Both Gabi & Phil were successful, and shown with many other world class illustrators.
Brimming with confidence Gabi & Phil approached the Aberdeen Art Centre (ACT) to host “Oor Monsters II”. Act gave Gabi & Phil the space to try more experimental works. Constructing 3d aspects & more “installation” based work, the Oor Monsters II was again well received & admired by all that came. The work was commented to be “something very different for Aberdeen”. 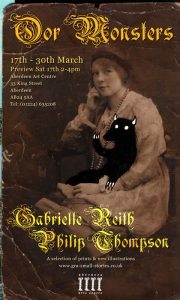 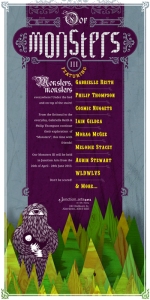 Oor Monsters IV & V – Explored the Skene Woods & Surroundings for their NEOS shows. Works were developed for the site specific installations. Phil created some interactive works, growing in confidence from his ACC Cultural Funding he won, to get 1 to 1 training from Martin Evans, a local Arduino Expert & “Oor Mannie” installation for the Look Again festival. Gabi explored a more 3d based appraoch & ran several workshops. Images were shown on Gabi & Phil’s instagram accounts, so follow them & you might get some new & exclusive images…

Oor Monsters VI (June 2018) is taking shape as a newspaper for the “look again” festival. Curated & created by Gabi & Phil, it will include their usual unusual look at normal things in a monstrous light, as well as having fantastic contributions from local & national illustrators & creatives. The paper will include “spy glasses” for all good citizens to use to document & report their findings of any unusual “goings on” in Aberdeen during the festival.